Over the past few months I’ve received several updates from my former trainees, who are now actively starting manatee research and conservation efforts in their home countries, despite many challenges. Here are some highlights of their efforts:

In central Mali, manatee researcher Soumaïla Berthe is starting surveys to learn about manatees in the Bani River, a 775 km long tributary of the Niger River. Berthe attended the training workshop I led in Djenné, Mali in 2010, and he was one of the most dedicated and enthusiastic members of the group. He’s been fascinated with manatees for years, and had educated himself about them online since there are few other resources in Mali. I was also able to visit his study area near San when I was in Mali (see posting from November 18, 2010). With no funding for his manatee work (his official job is a regional director for the Niger River Basin Authority), Berthe goes out in his spare time to start surveys, train others, and build a local manatee sightings network that is creating and maintaining a database of known manatee use areas and year round sightings. So far Berthe has documented a new dam on the Bani that has changed the pattern of seasonal waterflow and is likely effecting manatees ability to access important feeding habitat, plus he has recorded known seasonal use locations reported by fisherman, and collected samples of manatee bone and feces for genetics and stable isotope analyses. He has 5 volunteers working with him, and I am very impressed with his energy and determination.

Berthe (with binoculars) surveys the river with his colleague Lassina Diarra. Photo courtesy of Soumaïla Berthe. 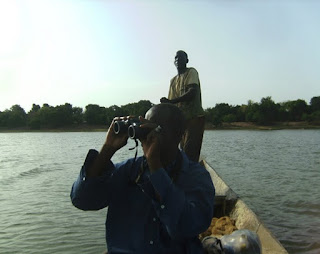 Berthe and Lassina check out a piece of manatee skull found by villagers living on the Bani River. Photo courtesy of Soumaïla Berthe. 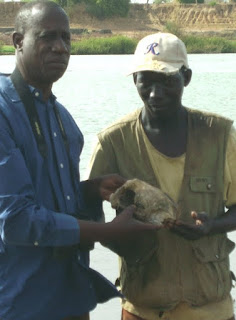 Côte d’Ivoire (Ivory Coast in English) has faced years of civil war, and the past two years have been especially difficult because of fighting after President Gagbo lost the last election but refused to step down and allow Ouattara (the winner) to assume the presidency. Additionally, in 2009 Dr. Akoi Kouadio, who had been leading a manatee research program in Ivory Coast for almost 30 years, passed away after an illness. The non-profit organization Akoi worked for dropped his project after his death, leaving his staff and programs with no way to continue.

Since then his former protégé, Dr. Kouame Djaha, has been trying to find a way to continue the manatee sightings network and educational outreach started by Akoi. Kouame attended the training workshop in Djenné, Mali and I was able to donate a full set of field equipment to his research efforts. Kouame reports that now that the government has settled down a bit, he and several colleagues have made contact with members of the former sightings network, and people tell them they still want to protect the manatee. Under Akoi, the project had ended all hunting in a lagoon system where 100,000 people live, which is a huge achievement! Kouame needs funds to restart their work, and for now he is working as a botanist at a university.

This is a photo I took of Kouame during the training workshop in Mali. His shirt says “Don’t kill the manatees” and was one of the educational tools Akoi’s group used to end hunting in Fresco Lagoon.

Manatee researcher Boureima Boubacar, who also attended training in Djenné, Mali in 2010, has now started manatee surveys in the Niger River in Niger. He’s working to reactivate a manatee sighting network that was set up years ago near W National Park (so named because the Niger River literally forms a “W” in this area. Test your geographical knowledge and see if you can find it on Google Earth! Hint: it’s south of the capital of Niamey and north of the border with Benin). During his surveys Boureima took environmental data and talked to people about how often they see manatees. He hopes to raise funds to continue his work.

Boureima (in orange) and a colleague discuss their data during a field survey. Photo courtesy of Boureima Boubacar.

At Lac de Guiers, a huge lake in northern Senegal, Tomas Diagne (who is also my husband) has been working with the community and the government for many years to establish a wildlife reserve to protect manatees, an endemic species of freshwater turtle (Adanson’s Mud Turtle, Pelusios adansoni) and many species of water birds. This past Fall the first signs designating the Tocc Tocc Refuge were erected, including a map of the refuge.

The local crew assembled for a group photo after putting up two signs. Bouys will soon also mark refuge boundaries from the lake side. Photo courtesy of Tomas Diagne.

A fisherman pulls up abandoned net full of aquatic plants within Tocc Tocc Reserve during a cleanup organized by Tomas and the local community. Photo courtesy of Tomas Diagne.

Tomas raised funds and has purchased a fiberglass boat for surveys and reserve monitoring, which they plan to start this year with a team of staff from local villages. He has also received equipment donations from Save the Manatee Club including a trolling motor, life jackets, a digital camera, a tent, and a desktop computer. Training, equipment and uniforms will be provided to refuge staff so that they can both enforce protection of the reserve, as well as collect scientific data on the manatees and turtles. A committee made up of chiefs and elders from each of the surrounding villages will oversee management of the reserve, ensuring that they can protect the wildlife and reap the benefits as it grows into an ecotourism site.

As I get more reports from other network members I will continue to post them to show more of the terrific efforts that are underway for West African manatees!