This past week I spent some time in Southwest Florida and gave a lecture on West African manatee research to the staff at the South Florida Museum in Bradenton. While there I also got a chance to visit with Snooty, the world’s oldest known manatee (he’s 64 years old!), who I last saw 9 years ago. He’s much bigger than his West African cousins. Thanks to everyone at the museum for a great visit! 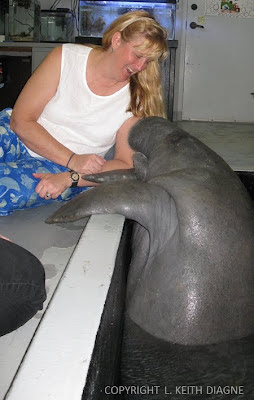 I also stopped by Mote Aquarium in Sarasota to pick up copies of a fantastic new reference book, Ecology and Conservation of the Sirenia, by Helene Marsh, Tom O’Shea and John Reynolds. Many sirenian researchers, including myself, worked with the authors for several years to provide the best available data on the manatee species we work with. The authors have very generously donated 14 copies for public libraries in Africa, where I’m sure they will be of great use to manatee researchers. I plan to begin distributing them to the libraries when I return to Africa later this spring.