It’s been awhile since I’ve written about Victor, the orphan manatee being raised in Gabon. Unfortunately there’s been a setback in his care that has resulted in his losing quite a bit of weight. Last winter and spring, Victor’s local caretakers were left on their own to do their job without supervision. They had been fully trained and knew their job, so it shouldn’t have been a problem. The national park person who had been supervising them as a courtesy left the job, and the position wasn’t re-filled for 6 months. Also unfortunately, others who said they would check in, did not. During this time the caretakers became very lazy and stopped collecting the daily amount of plants they were supposed to be feeding Victor. They stopped sending information to Victor’s care team and so it was August before the reality of the situation became clear to us. By this time, Victor had lost almost half his body weight.

As you can imagine, we were very upset and frustrated. Plans were being discussed for Victor’s release back to the wild, and Jonathan, the Masters student from Puerto Rico who had been to Gabon twice over the past 2 years to work with Victor and his keepers, was planning to return to tag Victor and track him post-release. As it turned out, Jonathan’s return to Gabon has worked out well for him to assess Victor’s condition and work to get him back to gaining weight. Jonathan arrived last week and immediately conducted a health assessment. He sent photos, a few of which I’m including below.

Although this has been a very difficult situation, I’m grateful that Victor is still alive, and that Jonathan was able to raise his own funds to return to Gabon at what turned out to be a critical time. My project was able to sponsor his two previous trips with generous support from the Georgia Aquarium, but for this one he’s been able to raise the funds himself. I’m also very thankful for the continuing care consultations provided by veterinarians Greg Bossart of the Georgia Aquarium and Ken Cameron, as well as Tony Mignucci of the Manatee Conservation Center of Puerto Rico. We’re now back on track to get Victor ready for release back to the wild!

Standard measurements and Victor’s weight are taken during each health assessment (photo courtesy of J. Perez-Rivera)

Jonathan watches Victor as he moves through his enclosure, which is now filled with many species of plants that African manatees are known to eat. His diet will now also be supplemented with fruits and vegetables including apples, mango, spinach, cabbage, papaya, bananas, potatoes and avocado, in the hope that this will help him quickly regain weight. (photo courtesy of J. Perez-Rivera) 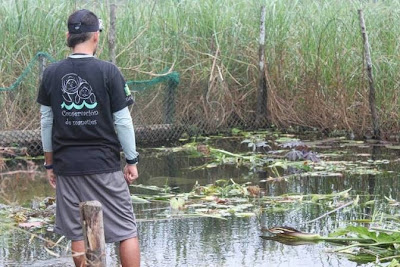